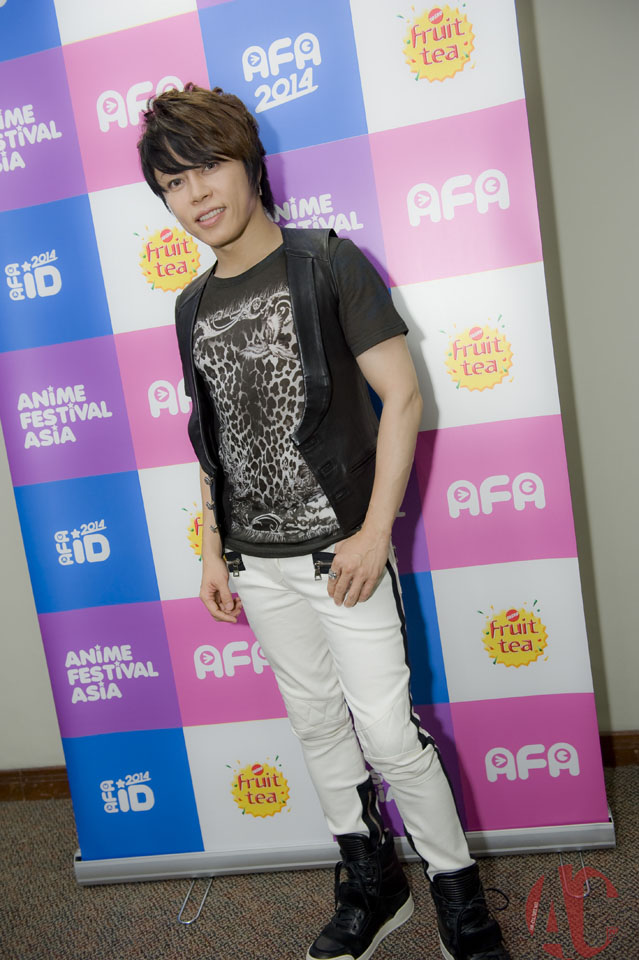 Moving on with what we have in stored for you, we now bring to you, the one, the only, Takanori Nishikawa from T.M Revolution!! As a veteran in the Ani-song scenes, a description of him isn’t really neccesary. But nevertheless, for the sake of our new comrades, seniors, please bear with us for a bit while we present them with a brief description.

T.M.Revolution or Takanori Nishikawa is a Japanese pop-rock artist frequently known as T.M.Revolution (Takanori Makes Revolution or T.M.R.). Though in recent days, he is also known for his other acts such as ‘Abingdon Boys School‘.

In addition to this, he is also known for his song contributions to the popular animes ‘Rurouni Kenshin‘, ‘Mobile Suit Gundam SEED‘ series and not forgetting, his duet songs with Mizuki Nana for the anime series, ‘Kakumeiki Valvrave‘.

Thank you seniors for bearing with us, we sincerely appreciate your patience. With media friends from SGCafe, AFA Channel, Journal Otaku and others, we bring you, Takanori Nishikawa!

Would you like to try singing a new and different genre of music?

In regards to that, rather than a genre, I would like my music to be something that is my own style. So listeners will be able to easily distinguish my music from the others.

Apart from your singing career, you have previously also had the experience of a voice actor for some anime series. Which of those characters would you be most attached to?

I am currently the voice actors of 2 characters of different anime series. One of them, is from the anime Disk Wars Avengers, as the Silver Samurai, and the other is from Sengoku Basara as the character, Sakai Tadatsugu. And I feel extremely connected to both these characters.

Is there anything special in which you have prepared for your Indonesia fans during this evening’s performance?

Just for this visit to Indonesia, I have been trying to learn some Bahasa Indonesian from other people. Also, since this is my very first performance in Indonesia, I have prepared some greats songs which will leave the people who came to concert with an exciting and unforgettable experience!

You previously cooperated with Mizuki Nana as a collaboration for the songs, “Preserved Roses” and “Kakumei Dualismc”. Are there any intentions for any of such collaborations in the future?

In the anime series Disk Wars Avengers, you played as the role of the Silver Samurai, that however, is a villain. If you could ever become a hero, what kind of hero would you like to be?

Hmm….that is quite a difficult question…what would be good? If it’s possible, I would like to be a hero that protects and saves the people using his voice. I would direct my voice and scream “Arhhhh…” to defeat the villains.

Do you play any video games in your free time?

Yes I do! I am now playing the game, Sengoku Basara on my console. I also own a Wii, Playstation 4, as well as a Playstation Vita. And as I am signed to Sony music, I do not own a Microsoft console.

Since this is now your 2nd visit to Indonesia, what do you feel about your fans in Indonesia?

Firstly, I am sincerely happy to know that I so much people was supporting me all the way from Indonesia! Although everyone here initially seemed to give off a shy impression at first, I could feel that they are all very warm and passionate. At first I was really shocked about it, since they all gave a very cool vibe. But during the hand shake event, I could feel their wonderful hospitality, and I was really happy about it.

You have a very original and unique choice of fashion that is exclusive to you. Could you share with us how did your inspiration in regards to fashion come about?

Thank you, however, I am personally not aware if I have a fashion sense of my own since I pick out my clothes according to my instincts. I tend to get my fashion inspiration from my traveling. From the experience I have gained over there, I try to arrange the clothes I wear using that knowledge. 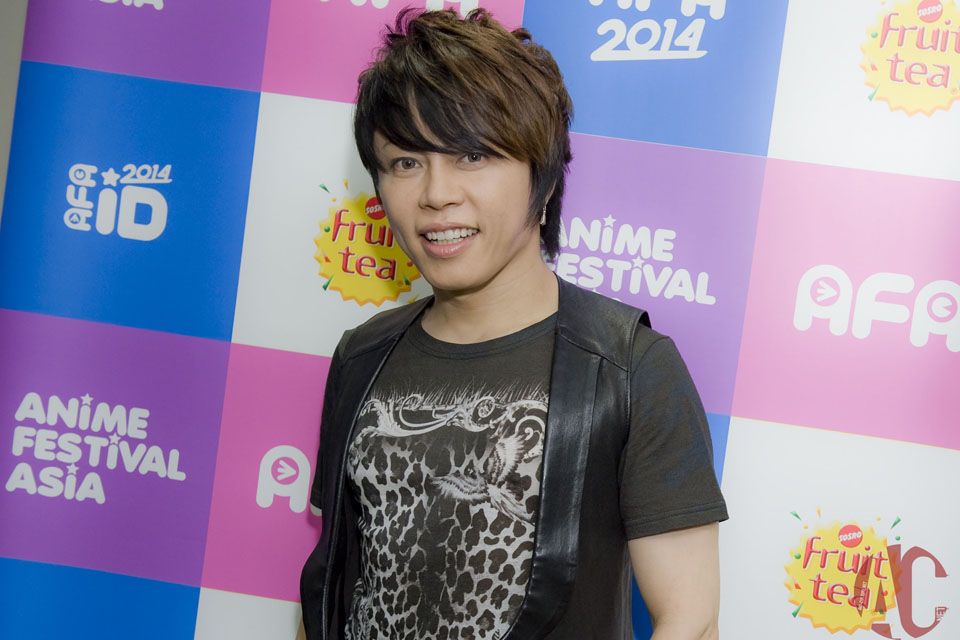 Could you share with us more of your thoughts about tonight’s performance?

Last year was my first time coming to Indonesia, and I was really moved by my Indonesia fans during my brief appearance on stage. And day by day, I was hoping for the day I could perform in Indonesia and for the past one year, I have been looking forward for this day to come! To me, this is a new beginning, and so, I hope that I would be able to visit Indonesia more often in the future.

And  today, is Indonesia’s Independence Day. As a Japanese, I am extremely honored to be able to perform on this revolutionary day where Indonesia attained its independence. And from here on, I hope that Indonesia and Japan will be on closer ties with each other.

That’s all we have for T.M Revolution, stay tune for more from Ani-Culture.net ! 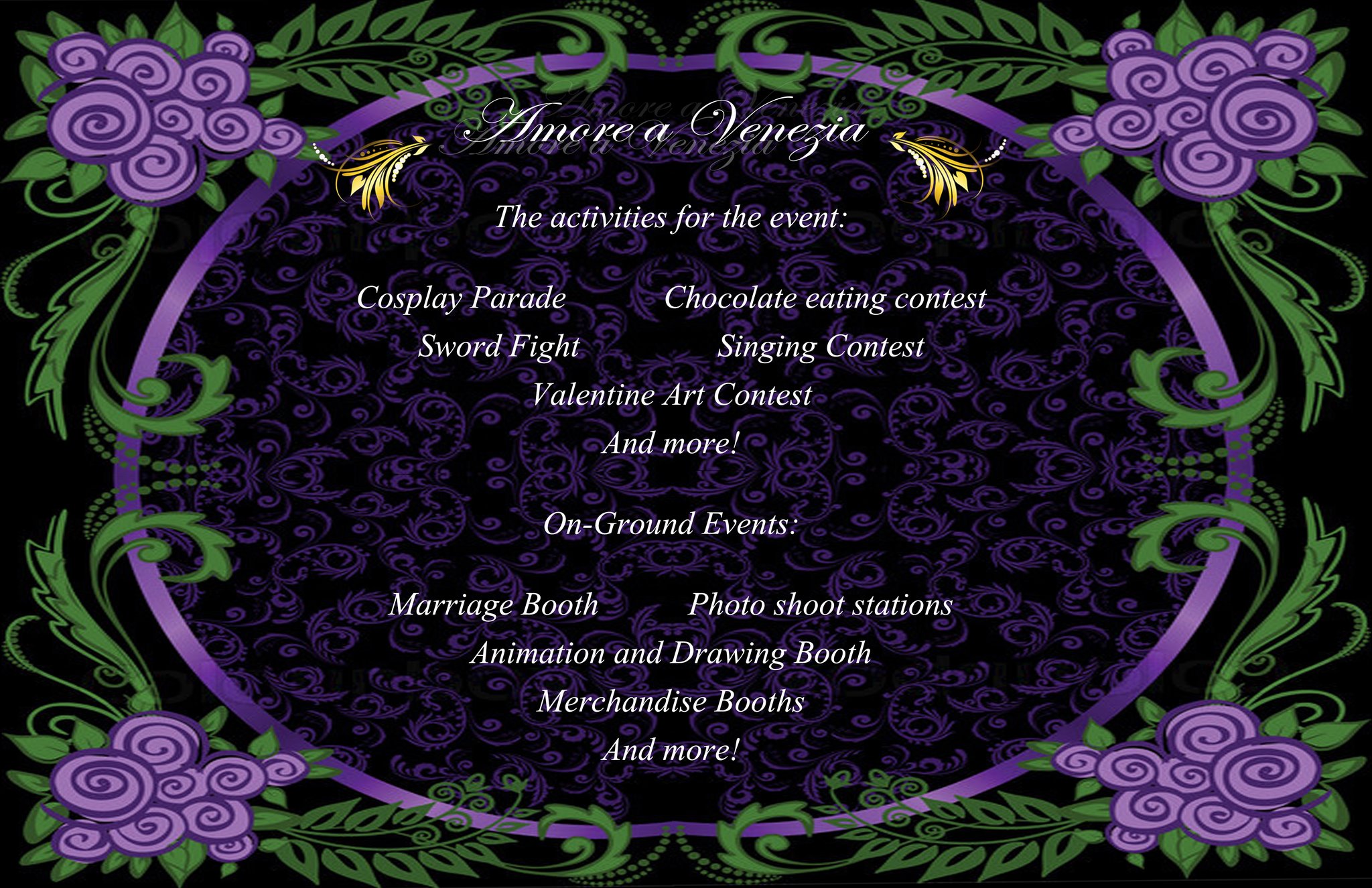