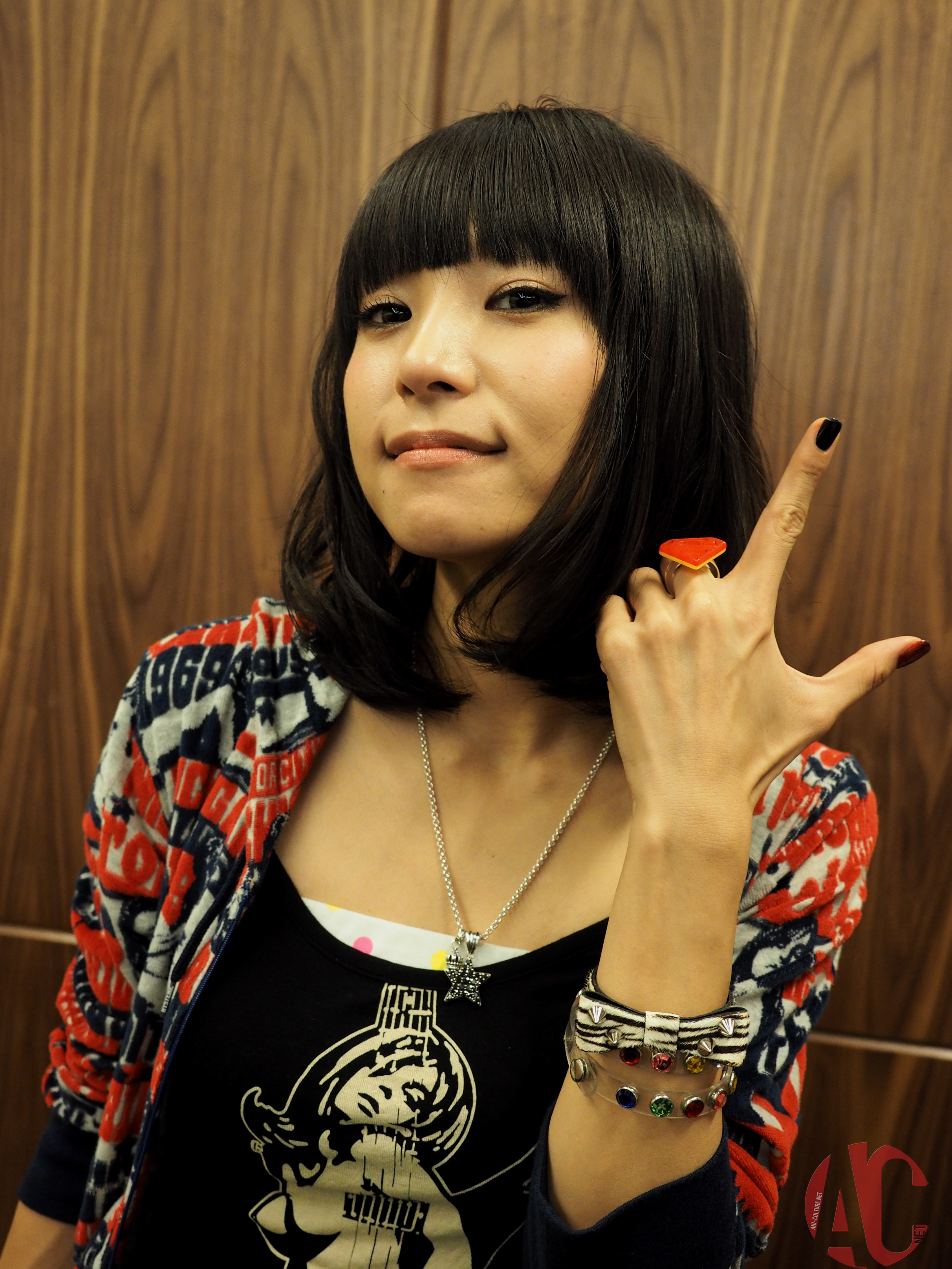 If you have previously enjoyed animations such as Angel Beats!, Fate/Zero, Sword Art Online, as well as Genei wo Kakeru Taiyou, LiSA, would definitely be no stranger to you. Having started out as a member of Girls Dead Monster, a band from the animation series, Angel Beats!, LiSA has pursued her singing career further and went solo. Together with band members from PARKING OUT,they formed the band, LiSA (Love is Same All) in the year 2011.

LiSA, is well known for her fun and energetic character and her natural ability to charge up her audiences with excitement during her live performances. However, during the group interview during AFA2013, never did we expect that we would be enjoying and laughing our way through the entire session. We were totally drawn in by her bubbly personality, and we could easily see how her fan base has grown tremendously, not only in Japan, but on an international scale over the past few years since her debut as LiSA in 2011. 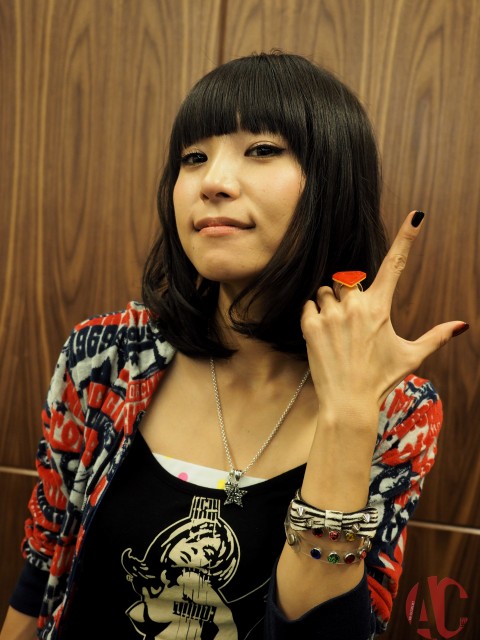 This would be your 3rd time coming to Singapore, what are your thoughts on Singapore so far? How does it differ from your hometown in Gifu?

“All Big !!!” There are plenty of tall buildings, long wide roads in Singapore! And it feels so familiar and nostalgic whenever I visit Singapore. The locals here really feel like the Japanese. They are really open and really easy to talk to, they are also extremely kind to me and I feel very welcomed very time I have a chance to come by.

Having visited Anime Festival Asia for 3 consecutive years, what attracts you the most to this event? 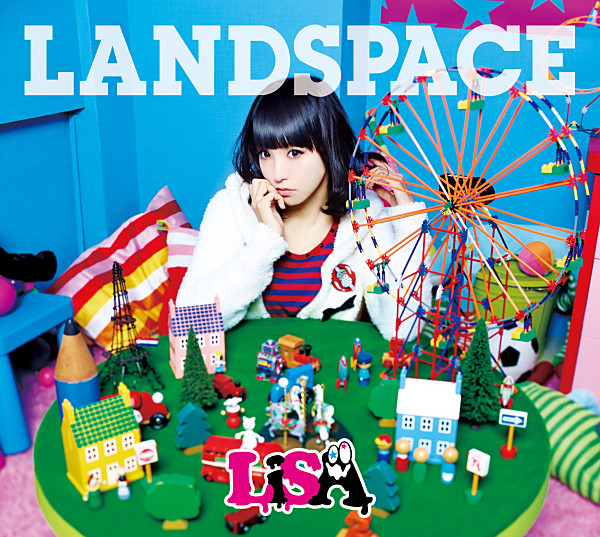 About the new album “LANDSPACE”, what was the concept behind the album? And also, was there any interesting episode during its production?

Firstly, “LANDSPACE” is taken from the word “landscape” after being, LiSA-lised. I thought that it would be really nice if I could have my own personal space in other places. Interesting episode during recording… hmm, rather than interesting, it is more of a emotional memory. When listening to the instrumental version of some of the songs, before adding in the vocals, I became really emotional then and began to start tearing up.

Is there any food that you enjoying having in Singapore?

For people who has never heard of your songs, what will you recommend them to listen for their first time?

Hmm…. I believe that no matter which part of the globe I visit,  the one song that people all love, regardless of whether it’s in Japan or overseas, would probably be Crossing Field. On the other hand, the first and second song of my new album, LANDSCAPE, are very J-pop-ish. And I really like it a lot. Especially the 2nd one, it is very catchy, and I would like to one day, see the audience shaking their hips during my live performance of this song in future. 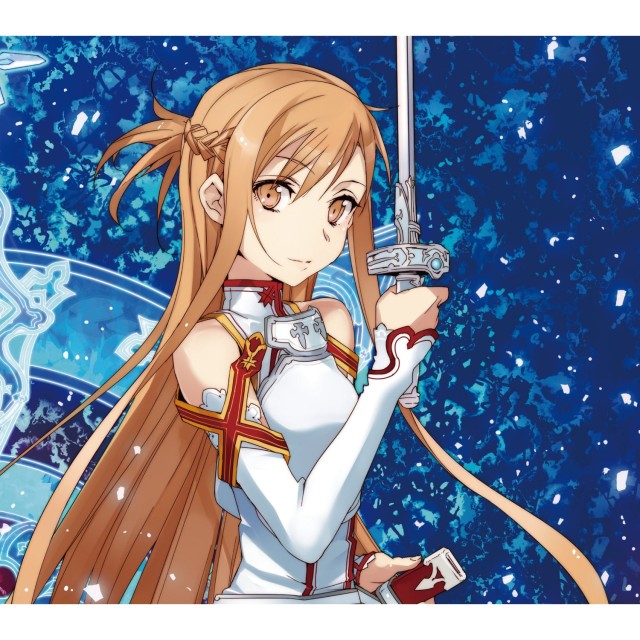 If given a chance to cosplay, Who would you choose to dress up as, and why?

Given an opportunity, I would like to cosplay as Asuna from the anime Sword Art Online. Not only is she a very important character from the series, but on top of all, she is really cute.

As a singer, stamina and vocal strengths are really important, what technique do you use to achieve it?

Whenever I’m in Singapore, I will always purchase this brand of throat drop, which goes by the name of “Pi Pa Gao”. It is meant for throat care, and I will drink lots of water whenever I consume it. And I will always buy a lot of it back to Japan!

As a singer, is there any rule imposed whenever you select a song during karaoke with your friends?

First I’ll listen to the request from my friends. And see what kind of songs we both like, and select a genre together, like for example anime, then we will sing it together.

About next year Budokan concert, what are your thoughts on the upcoming performance?

I am really excited and still a little shocked that I’ll be able to hold a concert in such a wonderful place, but in the end, I will not set any expectations for myself. I believe that in order for the audience to have a wonderful time, it’s important that I enjoy performing as well. 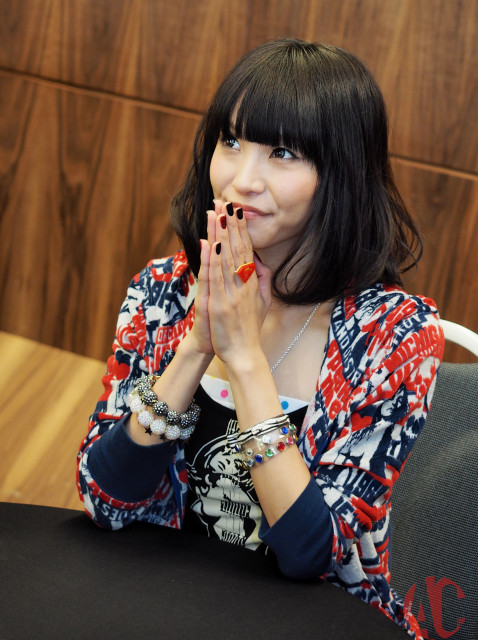 You were previously in the band Chucky and currently in Love is Same All (LiSA), as a vocalist. How has singing for anime changed your life?

It has opened new doors and opportunities to things that I like and enjoy. I got really involved in it, and I managed to witness the production process of anime series, and after entering this market, I have learnt a lot of new things, and the varieties and different type of music that I enjoy has broaden so much more.

What is the everyday LiSA like? And how are you different from being on stage?

For my everyday self, even at times like this, I am usually very nervous, that’s why, I actually a very shy person. But when I am on stage, where the audiences shout out “LiSA,LiSA…” , I get really motivated as I know, that I need to work harder to not disappoint the crowd, and with their cheers, I feel invincible!

What is your inspiration when creating songs?

Every day, I gain new experiences though conversations, meeting new people, and when something good happens, I will memo it down into my heart, and put it into a song or lyrics when I get back home. 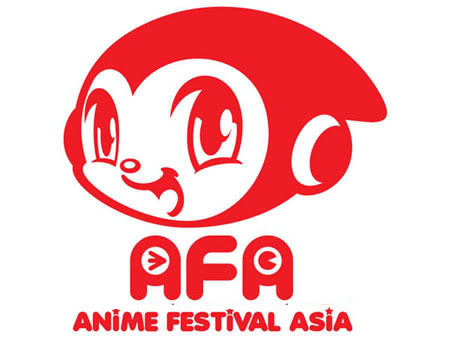 Having visited Anime Festival Asia for 3 consecutive years, what attracts you the most to this event?

How about holding a solo concert in Singapore?

I would really like to have one! Please call me!!! And let’s fun lots of fun when that happens! It’s a promise!

What do you enjoy doing during your free time?

Room clean! I enjoy cleaning my room! I also really love going for massages! Like for body care, as well as going for Spa to relax when I have the time.

Have you received any interesting gifts or presents with leaves a deep impression on you from your fans before?

I like receiving letters, drawn posters, or Uchiwa ( Japanese paper fan), but as expected the ones that I love having the most are hand written letters! As they are written with lots of emotions and effort. And I also really enjoy receiving items that can’t be found in Japan, such as once I received sort of a toy, that moves around and does a back flip at times. I found that really interesting! 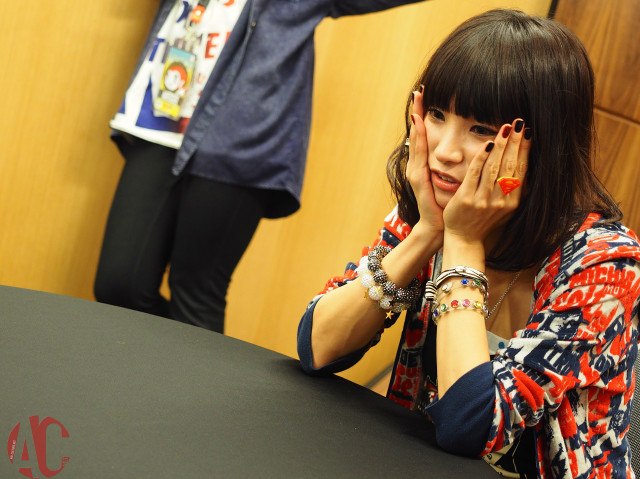 Have you ever considered changing your band name, LiSA (Love is Same All)?

Hmm… that’s a really interesting question, let’s see. The alphabets are L.I.S.A…Hmm…let’s start with L first. For L, there’s “Love, Like, Lovely”?? And for I, maybe “International”?? And for S…. Super?! And A….APPLE?? Ah! There’s “Animal” too!! Ahh…sorry, “Anime”!! So putting them together, “Lovely International Super Anime”!!! How’s that!! Do you think it’s alright??

Often in song popularity rankings, you frequently come up ranked in the top few numbers. What do you think draws people in, to your work so much?

Firstly, I believe that the first point of contact is usually from people who enjoy anime works, and from there, because there is so much love from those people towards the anime that they enjoy. Like for example, people who enjoyed the works of this author will be drawn into his previous works as well. And in the same way, people who have heard my music is attracted in the same manner thus started giving me their support. And I feel really happy about having new people appreciating the music I create. 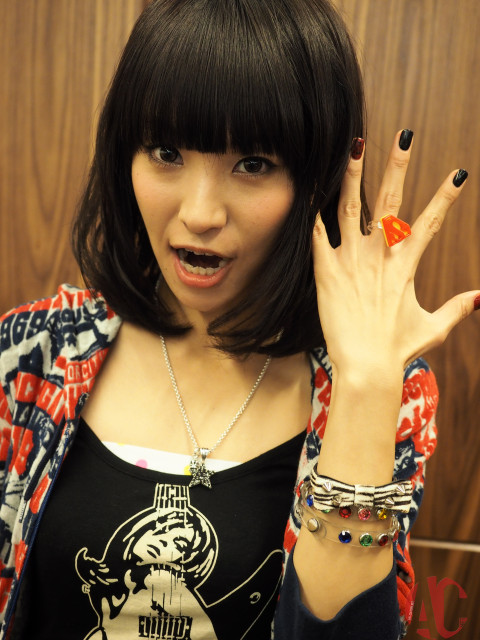 I had recently taken a liking to this animation series by the name of “Guda Guda Fairies”（グダグダ妖精s）, it’s about 3 fairy friends sitting around the table, and discuss about interesting stuff. They also do parodies of other famous anime. For example, there was once, they were talking about magical girls, and they did some parodies of other famous magical girl anime. Also, their opening theme song is really interesting, so please watch it when you can!

How do you intend to make it a special experience for your fans this year at AFA?

It’s been one year since I last performed in Singapore. And I am also currently still in the midst of a live tour, therefore my team and myself feels really powered up for this upcoming performance in Singapore. And I hope to be able to bring out the best of the anisongs that the people here in Singapore, love so much!

That’s all we have for LiSA, stay tune for more from Ani-Culture.net ! 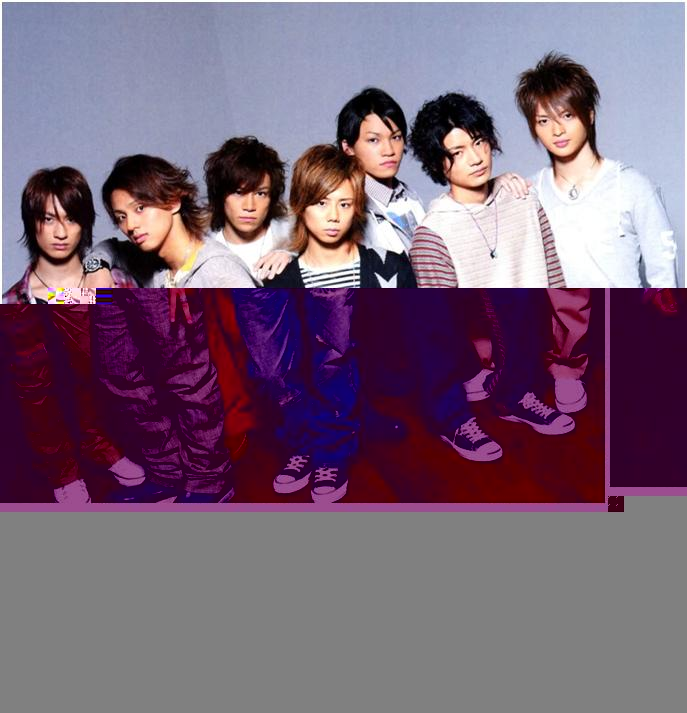 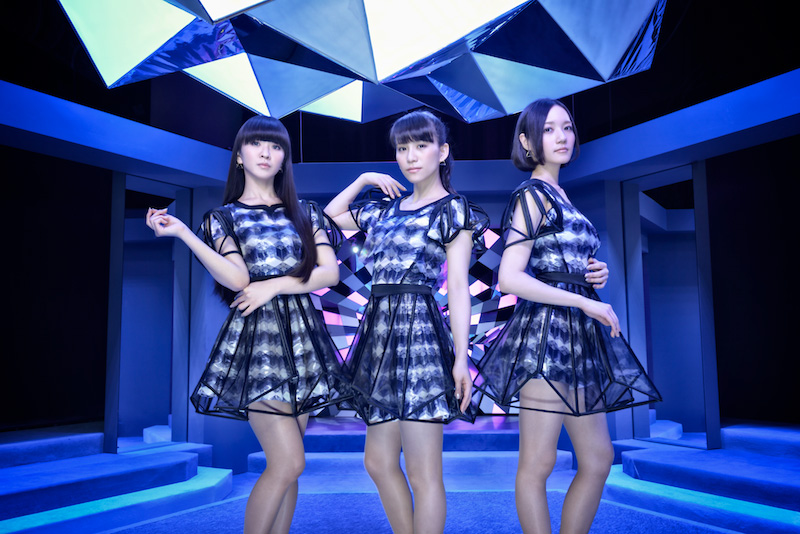 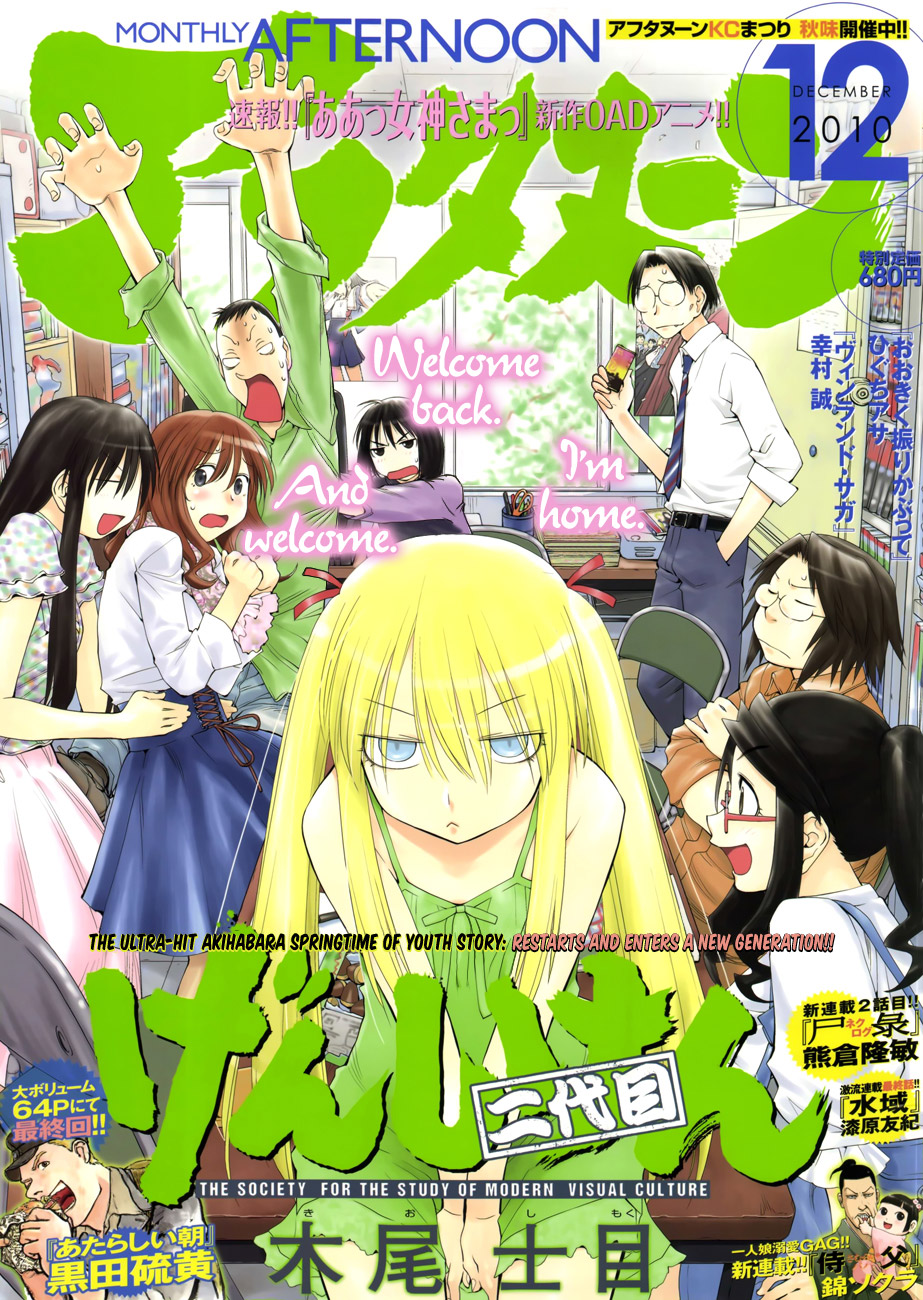