Japanese and Korean most notable, young, talented stars brilliantly appear
opposite each other in this film! The starring is Hyomin and the costarring is Kurumi Shimizu and Kento Yamazaki. A new kind of original love story is about to be born by the director of “From me to you (Kimi ni todoke)”.

The original project “Jinx!!! ” by the director Naoto Kumazawa (“From me to you”) , who appointed many young actors like Yu Aoi, Juri Ueno etc as starring and made them awakened to performance, will start shooting in February.

The starring is Hyomin , who is a member of K-POP idol group T-ARA , and has established reputation in acting skills as ” idol actress”. This is her first work for Japanese film. Costarring is young, talented actors, Kurumi Shimizu and Kento Yamazaki, whom the Japanese movie world should pay attention to the most. Because of the original project, the one and only co-starring, which has attracted international attention, came true.

This film is a story of friendship and love by three youths, Hyomin as a foreign student from South Korea , Kurumi Shimizu and Kento Yamazaki as college students. Please be looking forward to the fresh outlook and the completely original direction by the director Naoto Kumazawa, who has an excellent reputation of character sketch. It will be shot from the mid-February to mid-March in Kita Kyusyu, Fukuoka, South Korea, then it will be released in this Autumn. Please pay attention for the latest information in future.

・Hyomin (Born in May 30, 1989)
A member of K-POP idol group T-ARA , and has been known as “Idol Actress” from all Asia. She starred in the drama “My Girlfriend is a Nine-Tailed Fox”(2010) and “Gye Baek”(2011) , the film “Gisaeng Ryung “(2011). And also, she was cast in the musical “Our Youth Roly-Poly”, the drama “The Thousandth Man”. She extended her range of expression and has an excellent reputation of acting skills from the inside and outside of South Korea. This is her first work for Japanese film.

・Kurumi Shimizu (Born in July 16, 1994)
She played splendidly a high school student “Mika” with a strong core in the film ” The Kirishima thing”, and got greatest evaluation. After it, she starred in the drama “Highs School Drive”,”Dear mom” and attracts attention. Recently she is co-starring with Keisuke Kuwata in TV commercial and her expression impresses an infinite possibility.

・Kento Yamazaki (Born in September 7, 1994)
He is a young actor who was cast on many movies (ex “Kyô, koi o hajimemasu” “Another” “Real Onigokko 3″ ” Kirin no tsubasa: Gekijouban Shinzanmono”) in 2012, and attracts most of the attention now.He has a great reputation not only for his strong presence but also for his acting skills, and will attract the further attention in 2013 as a talented actor.

★It is scheduled for release all at once in Asia!
The planning and production are ROBOT of “BAYSIDE SHAKEDOWN” “Always san-chôme no yûhi” “Umizaru” series. Also, they form a tag team with T-JOY, who distributed “Evanfelion Q” “009 RE:CYBORG”, which make a strong effort to distribute to Asia as well as Japan, and start to work a simultaneous Asia (Japan, Hong Kong, Taiwan, Singapore etc) release of “Jinx!!!”.

STORY
Jiho (Hyomin) who has studied abroad from South Korea meets with Kaede (Kurumi Shimizu) and Yusuke (Kento Yamazaki) at the university in Japan. Kaede and Yusuke, who are childhood friends, are the relations which a honest feeling is not conveyed mutually ,though they are interested in each other. When Jiho sees them, she teaches a method of the Korean style love instruction to each and is going to lead their love to the success. Jiho brings in Korean style love instruction one by one ,like way of the email, how to invite date, how to make a smile, the situation of love confection. Kaede and Yusuke were puzzled over difference in a way of thinking and culture first, but the love of them starts awkwardly. 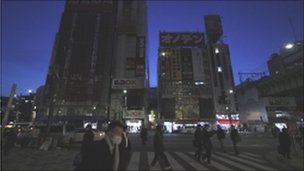