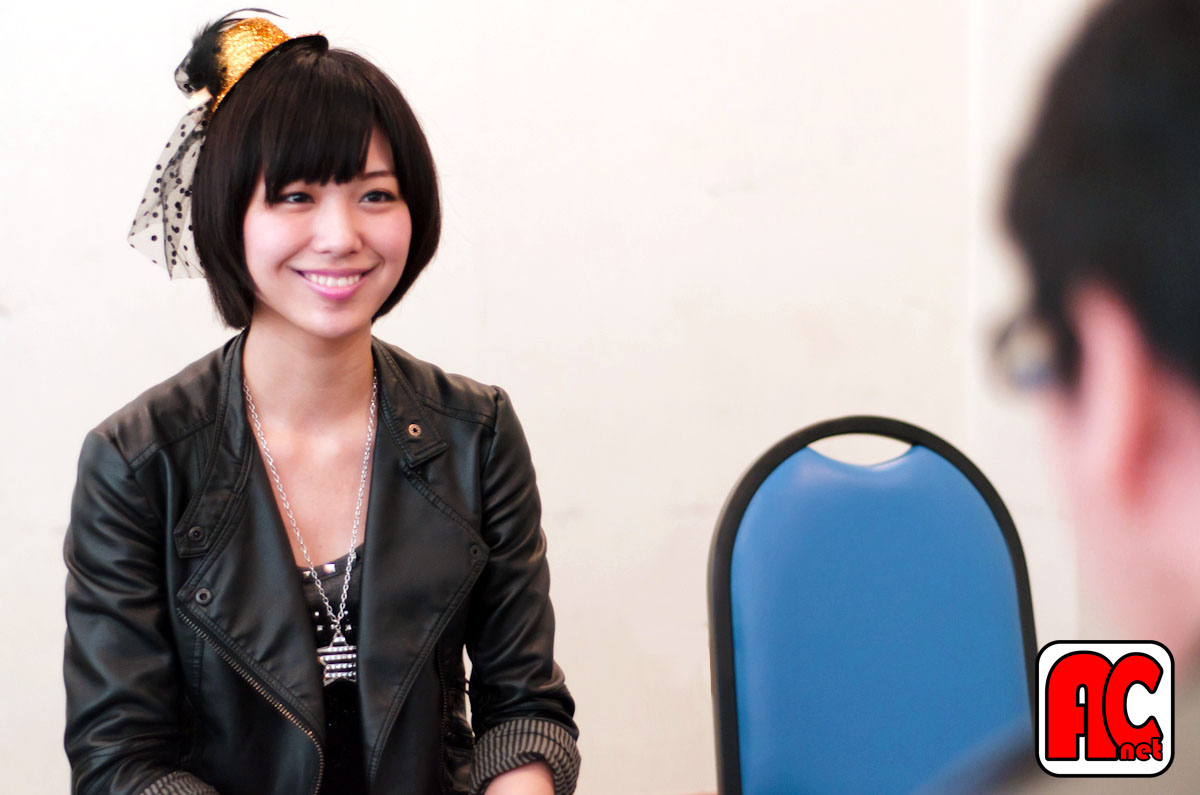 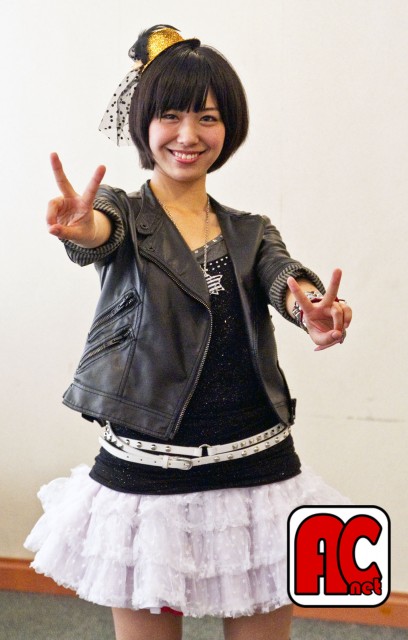 Aimi Terakawa, who goes by a simple stage name of “AIMI（愛美）”, may not be well-known in the Ani-Song world at the moment, but trust us, she will be very soon.

Known primarily for her songs for “Card Fight! Vanguard” and “Ben-to!” and her voice acting role of “Suiko” from Vanguard, Aimi surprised audiences with her passionate and energetic performance on the first day of the Super Genki Ani-Song Concert. Off-stage, fans were drawn to her approachable and cheerful personality, and her impeccable Vanguard card skills. 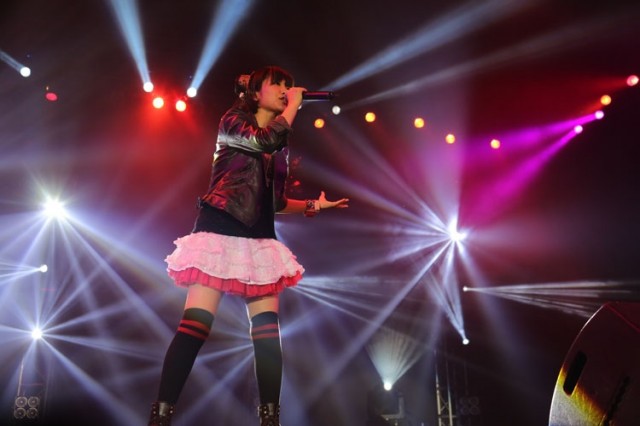 She may just have debuted, but she has the passion of a superstar.

Aimi came on as the second act for Day One’s Super Genki Ani-Song concert,  and while I certainly did not know much about her beforehand, I found myself enjoying her performance immediately. She displayed great passion and energy in her performance, singing her trademark songs from “Ben-to!” and “Card Fight Vanguard” as the opening act. 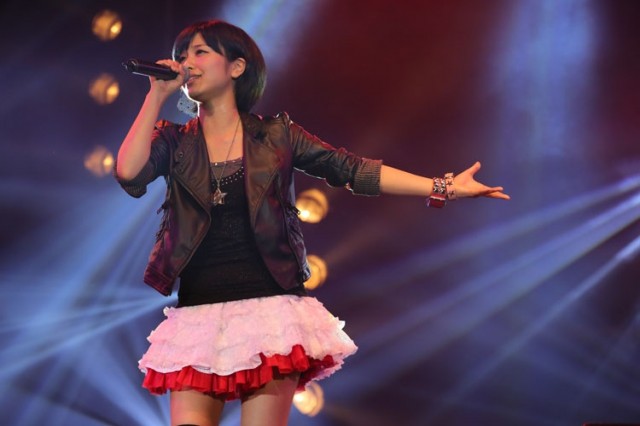 What was a pleasant surprise was that she went on to cover her own rendition of “Sakura iro no Kisetsu” from D.C.S.S and “Hare Hare Yukai” from Haruhi Suzumiya, drawing loud cheers from the crowd!

Aimi ended her performance with a MC segment, expressing her thanks to the audience for attending her first major live ever. Watching her performance, one easily can see where she gets her inspiration from- namely, a certainly rising Ani-Song Star that appeared at AFA SG 2011 (and get into that in detail later.)

Ani-Culture was humbled by her friendly and down-to-earth demeanor in our chat with her. On the back of her first major live performance ever, we sat down to discuss her thoughts about Malaysia, her music and her aspirations for the future.

Makotosato: Thank you for granting us this interview! Before we start, I would like to say that I was very pleasantly surprised by your passion and energy in last nights’ performance, and many people who I spoke to said while they did not know who you were, they thoroughly enjoyed your performance, and really hoped to see you again.

AIMI: Thank you very much!

Makotosato: This is now your third time in Malaysia, would you say that you now have an affinity with the country?

AIMI: This is my third time in Malaysia, and I’ve grown very fond of the country, for everyone is very kind here. Also I can hear music everywhere, it’s a very lively country, I very much like it here.

Makotosato: For those who may not be familiar with you, how would you describe your style of music?

AIMI: I would describe my own style as very lively, bright and cute, and I hope whoever hears it will become happy.

Makotosato: Does your choice of style reflect your own personality or personal outlook in life?

AIMI: Yes, it does, as I am very lively and very smiley, and I want this to be reflected in my music.

Makotosato: You have been noted for your songs for the two Anime, Card Fight! Vanguard and Bento!, does singing Ani-songs bear any significance for yourself?

AIMI: I have been watching Anime since young and basically, through watching Anime I learnt about Ani-song, and that became my dream. I deeply cherish every song that I sing.

Makotosato: And that is the reason why you joined the 3rd ANIMAX Anison Grand Prix?

Makotosato: Let’s talk about your concert last night; you mentioned it was your first big live performance in front of so many people- so how do you now feel about the whole experience?

AIMI: It was my first time on a big stage, and it was a very important learning experience since I was able to learn from the other more experienced performing artists.

Most importantly, I could see the faces of fans from the front to all the way away to back, cheering me on as an Ani-Song idol. Even though it was a large stage, I could feel the energy from the fans as I performed. Big stages are really wonderful.

Makotosato:  During the concert, you covered two Ani-songs, one from the Anime Da Capo II and the other from Haruhi Suzumiya, is there any particular reason why you choose those two songs?

AIMI: I am actually performing the opening theme for the recently released Da Capo (DC) III game, and so I wanted to sing some thing in relation to that series, thus I chose “Sakurairo no Kisetsu”.

For “Hare Hare Yukai”, I wanted a song that everyone is familiar with, and could share in the excitement.

Makotosato: Do you have any fellow artistes you look up to?

Makotosato:  Is there any attribute that you would want to emulate from them?

AIMI: Yah, especially from LiSA-san. The way she performs contains a lot of emotion, passion and feelings, and I would like to be able to do that in the future too!

Makotosato: Personally speaking, you did at first remind me of LISA’s style of performance, but afterwards, I felt you have your own unique style and personality on stage.

AIMI: Thank you very much!

Makotosato: We understand that you are fond of playing the trading card game Card Fight Vanguard, how would you compare the local players in Malaysia with the ones back home?

AIMI: The players in Malaysia, like in Japan, really love their cards. They take very good care of them even during a cardfight, and they are very serious about their play.

In my personal opinion, there is not much of a difference as everyone understands one another through the cards; the cards are almost like a common language.

Makotosato: When it comes to voice acting, you are known for your role as voicing the character of Suiko in Vanguard, what did you do to prepare yourself for the role?

AIMI: During recordings, I keep reminding myself to think like Suiko. In fact, even when looking at my fellow cast members, I would see them from Suiko’s perspective, rather than my own.

Makotosato: And how do you feel about your character in the series?

AIMI: Suiko is an elder sister figure in the Cardfight: Vanguard, thus her personality differs quite a bit from my own. Suiko is the sort that prefers standing at the sidelines, carefully observing events, while I am the type to jump straight into the action.

Even so, I feel that I have managed to bring out that elder sister part of myself, and given my best to bring her to life.

Makotosato: Besides Vanguard, do you have any other favourite pastimes?

AIMI: Netsurfing? Generally it has to be Anime watching and Netsurfing, I guess.

AIMI: “Another”, for the story in particular.

Makotosato: Regarding the future, do you have any personal aspirations?

AIMI: Be it as a voice actress or a singer, for now, every day is important for me to grow. I hope in the future I will become a better singer and sing for the Fans!

Makotosato: What can your fans look forward to in the future?

AIMI: I have yet to hold a One-man live, and my hope is to hold many in the future. Also my new song “Link” will be coming soon!

Makotosato: Can you tell us a bit about your new song?

AIMI: My new song “Link” is the opening for the anime Oda Nobuna no Yabou, starting in summer. It’s a very passionate and cool song!!

Makotosato: Do you have any messages for your fans?

AIMI: Thank you always for your support and I will definitely do my best with a smile!

We sincerely hope that Aimi’s dreams and aspirations will come true in the near future, and I am sure many of her new fans from Malaysia would agree.

Please visit http://aimi-sound.com/ if you want to find out more about AIMI!

We would like to thank Dentsu Malaysia, SOZO and Anime Festival Asia for their assistance throughout our coverage of AFA Malaysia.

This is Makoto Sato, signing off.

Tueac’s addon: It has been 2 months since AFAMY, I’m very sorry for this delay.

And AIMI’s new song, “LINK” is already out on sale. In fact the song even managed to get into the Oricon Top 50 on its debut week at 36th. And like Aimi mentioned, it’s indeed a very passionate song. 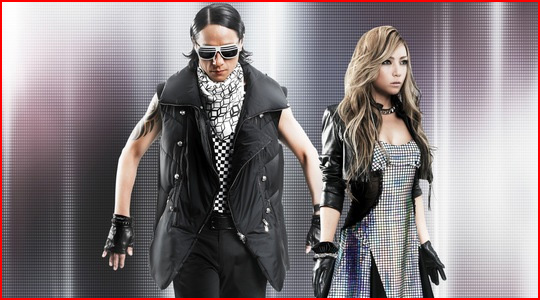 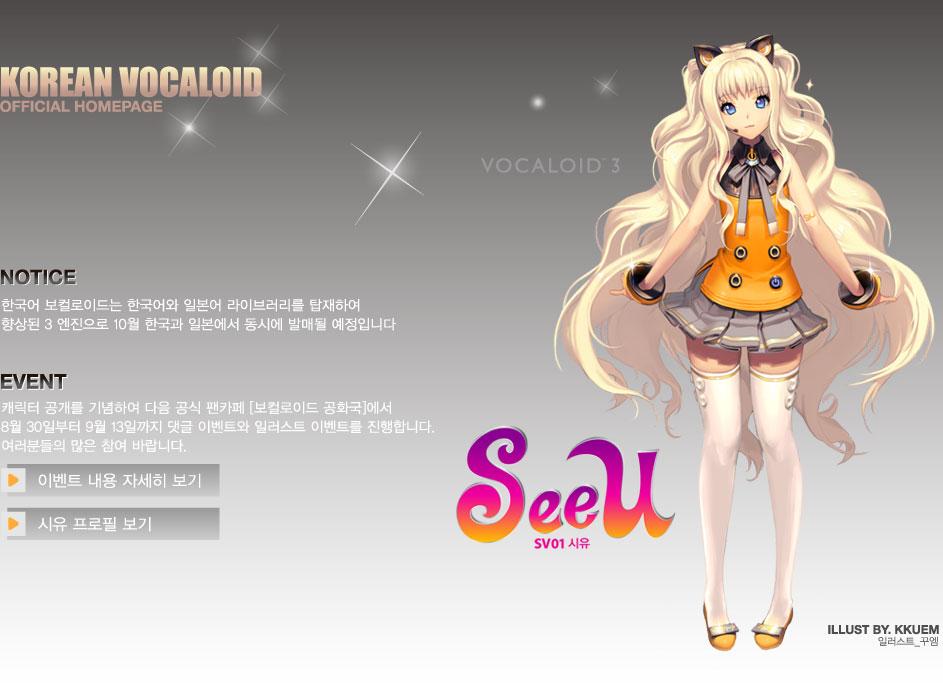