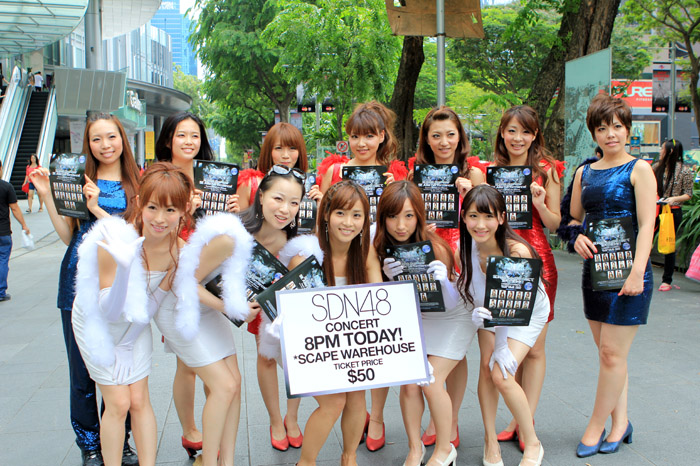 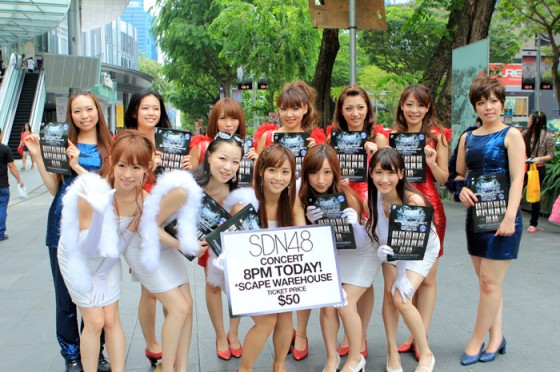 Last Friday, Animax gave us 2 tickets to watch SDN 48’s first live outside of Japan, and in Singapore. And personally, I have not much information about the ladies in SDN48, only that they are older, more matured and a sister group of AKB48.

Before even the concert, the girls have already arrived to do some promotion of their concert, which resulted into something like a parade. The girls are to walk down Orchard Road, giving out flyers to promote their stage. And it’s not normal when you have 12 ladies walking down the street in attention seeking apparel… 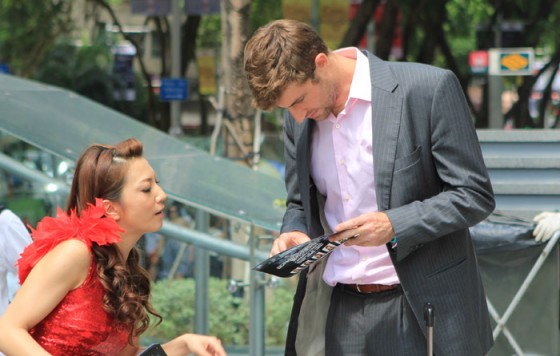 They are event able to do something, some of the AKB48 girls are unable to do… Go see Merlion-san~ 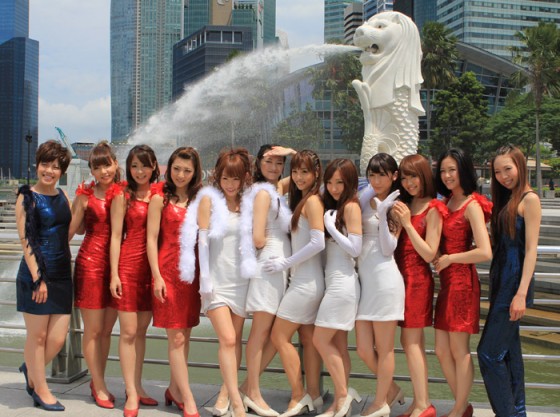 The concert itself turns out to be quite a successful and different experiences, compared to the AKB48 Stages, with the ladies are making jokes aimed obviously at the older crowd.

It’s start with a nice touch, showing the highlights of the 3rd Senbatsu! I’m really touched to see the reactions of the girls, be it crying, smiling or surprised. Then the show starts. 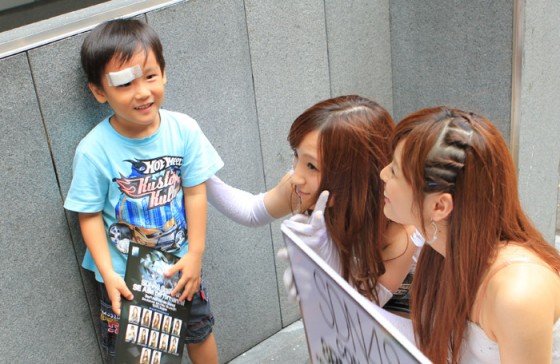 Don't be hurt... they care for the young too~

For me, when they first appear on stage, I’m thinking for some reasons, that a bunch of OLs is now dancing and singing! I looked on my right and compared them to the OLs to my right… Yes… apparently there’s quite a few of them watching the show…

By the end of the first segment, during the MC and intro part, where some of the ladies, especially Rachel(Reiko Nishikunihara), did jokes meant for the drinking table, example, Merlion!! Horrrr~*

*those who went will know what i meant~

For the sound, what really leave a deep impression with me, has got to be Rachel’s voice. Her sound is just too good~ and I’m not expecting it. Where else what disappoint me the most would be the song that comes after Rachel’s solo Yuuwaku No Garter… Perhaps all the online videos made this performance underwhelming and to add on, I didn’t even see them take it off!

Another surprise came with their new Single GaGaGa, which I thought will not be sung. Afterall I’m not really expecting 5 songs for encore.

As for the rest of the concerts, It’s refreshing and nice but the crowd and the atmosphere that I’m in made the show felt a little boring… … Once again, the Audience plays a very important part for a concert~

Sigh, I didn’t even break the light stick I had…

Ok…so Here is the Tracklist, but its still incomplete…and not 100% correct, as i forgot some of the songs, and the list might not be in order!! But still better than nothing yeah…:P

– Aiyo Ugokanaide (Rachel Solo)
– Yuuwaku No Garter
– Im Sure
– All In

* Thanks to Masashi for the correction!

Btw, did I mention that you can also get a free pair of tickets from Animax for the AKB SG Theaters?

From 6 June – 26 August, Mondays to Fridays, 8pm – 12am, a name of any of the AKB48 members will be shown on Animax (StarHub TV Ch532). Viewers can submit the name displayed each day at animaxtv.com to stand to win the following prizes:

As you all know, SDN’s songs and stage style has a more mature feel compared to AKB, and to match up their style, red and purple lightings are mostly used during the whole concert. This compliments the members’ dances and makes it much more catchy and mature.

During the MC, four SDN members come on stage to talk to audiences about their impression of Singapore. Personally I found this talk section with some added funny jokes really would shorten the distance between the audience and the members, even it eats up some song time. However the reason we are there is not only for their performance but also to have a chance to know them better isn’t it?

And the last thing I want to mention is the encore. For this part I have to admit that the elder SDN sisters have done better than AKB because they put up 5 songs for the encore and it really surprised me when they started singing AKB48’s ‘Ponytail to Shushu’. Of course granted that the song sounds a bit different from the original AKB version but on the other hand SDN’s mature voice has given the song a certain special glamour. I hope to see AKB perform SDN’s Yuuwaku no Garter at their 3rd stage~ XD 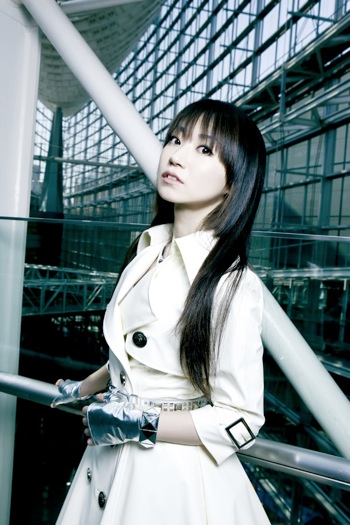 PSN under attack, PS3 owner please be on alert! 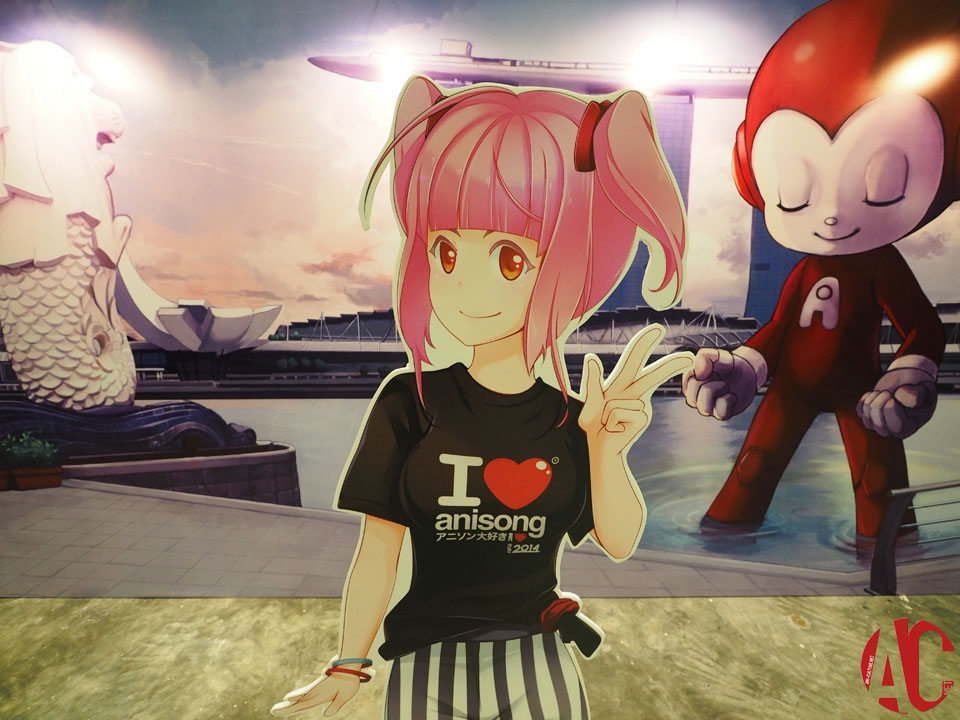 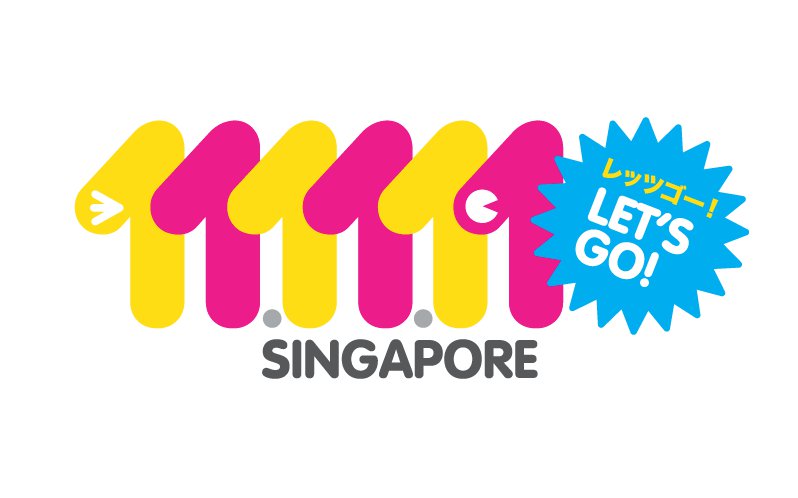