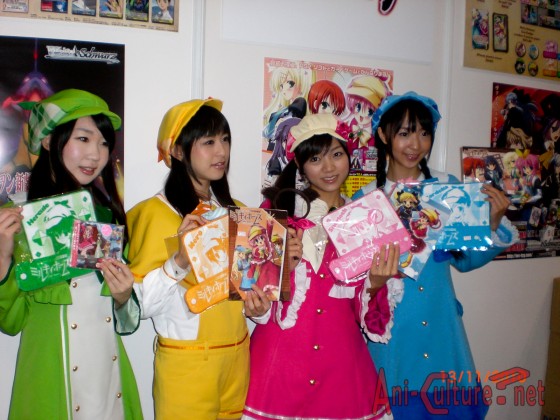 Anime Festival Asia X presented an opportunity for the Seiyu group, Milky Holmes, to come to Singapore. They were here with Bushiroad to introduce Bushiroad’s popular range of card games like Weiβ Schwarz and Victory Spark.

This was the girls’ first time in Singapore. But who are the Milky Holmes?

They are a seiyu/idol group comprising of  seiyus from the anime and upcoming game Milky Holmes. From right in the picture above, they are,  Izumi Kitta as Cordelia in blue, Suzuko Mimori as Sherlock in Pink, Sora Tokui as Nero in Yellow and Mikoi Sasaki as Elly in green.

Q:How did you feel about voicing the characters?

Suzuko Mimori: Sherlock is a very energetic character, thus by voicing her, I in turn, feel energetic too.

Sora Tokui: My character Nero, is greedy or likes to eat a lot, that is why I am having fun voicing her, because I have the same characteristic.

Mikoi Sasaki: Elly’s toy is a direct opposite of her personality and thus very interesting to voice.

Izumi Kitta : Cordelia loves to fantasies about flowers, which is somehow like me.*Laugh*

Q:If you process super abilities from the toys like your characters in real life, what would you do with them?

Suzuko Mimori: My power is to move things 1kg or less, so I would like to use it as a remote control.

Sora Tokui: Nero can control electronics and electrical appliances, so I would use this power for direct hacking, like using it to cheat in a game.

Mikoi Sasaki: I would use my strength to carry things but that might not be necessary or appropriate for a girl…

Izumi Kitta : My ability is to be able to hear from a far distance. So I will use it to hear who is talking bad about me and then ***  them.*Laugh*

Q:This is the first time you are in Singapore, so how do you find Singapore so far?

Suzuko Mimori: I’m not very comfortable with cold weather, so coming to a warm place like Singapore feels great!

Sora Tokui: I haven’t had the chance to visit the swimming pool this year, so I am happy when I can actually go to the Hotel’s swimming pool.

Mikoi Sasaki: Since I got here, I have seen a lot of greenery in Singapore and I love it a lot.

Izumi Kitta : If you have read my blog, you would know that I love Gyoza(Fried Dumplings) a lot. And in the Japanese ranking for Gyoza, Singapore is ranked no. 3! So I would really like to try eat the Gyozas here.

Q: What inspired you to become a Seiyu?

Suzuko Mimori: I have experience is theater and dancing, so I was scouted for it as well as being a seiyu. I find it a challenge for myself and thus took it up.

Sora Tokui: I am born an Otaku, so this is the natural career route for me.

Mikoi Sasaki: I have always liked anime, but what really inspired me and got me interested was Naruto, thus it started from there.

Izumi Kitta : Since young, I have never liked my voice, but I was praised for it one day. Since then I want to make a career out of it. 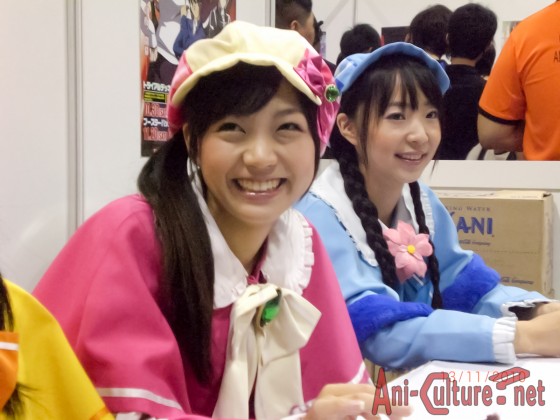 Q: What is your biggest dream?

Suzuko Mimori: I want to be fluent in English and then stay in Singapore. Ｏ(≧∇≦)Ｏ

Sora Tokui: I want to pilot a Eva, and save the world!

Mikoi Sasaki: I hope to have live concerts in every prefecture of Japan, including my hometown and if possible the world.

Q: What is the difficulty when voicing your characters?

Suzuko Mimori: Because my character is pure, sweet and naive. So I have to do it in a way that, the character can be conveyed by her voice, which is very difficult to do.

Sora Tokui: During the animation, my character needs to express some strength in some ways, like a grr! That is quite a challenge to portray it properly.

Mikoi Sasaki: In certain scenes of the animation, my character needs to have a very feminine voice, and that is challenging as well as difficult for me.

Izumi Kitta : In the anime, there are certain parts where we have to act like an animal, so producing the animal’s voice is very hard for her, since it’s very out of her character.

Q: What do you see yourself doing in 10 years time?

Suzuko Mimori: I want to be an idol, that can dance and sing. Than hold a live in Singapore. *SINGAPORE IDOL*

Sora Tokui: I want to draw manga and become a mangaka, but I also want to remain as a seiyu. So I want to be professional in both.

Mikoi Sasaki: I want to be a Seiyu that can sing.

Last question: How is the PSP Game different from the Anime?

Suzuko Mimori: The game’s story is more serious for Sherlock compared to the anime.

Sora Tokui: In the anime, Nero actually does more talking and things compared to the game where she is actually eating most of the time.

Mikoi Sasaki: In the game, there is Kobayashi Sensei, but in the anime, he is practically missing. So all the interaction and affection with him is also missing…

Izumi Kitta : My character is about the same in both, but in game, Cordelia is more of an elder sister and less crazy compared to the anime. But ultimately, they solved the case.

And so the interview is concluded. If you want to hear more of them, you can catch the anime, Milky Holmes. Or buy their Single, Seikai wa Hitotsu! Janai!!

Here is a PV of Milky Holmes,

Lastly, let me thank Bushiroad and Genesis Frontier for organising this very rare interview with the girls. Not to mention, Mr Terence from Bushiroad as the translator as well as  the bloggers on the table, previously mentioned above, they are, NK-DS, Bonkurasu, Bjorn.org and SGCafe.

PS: For more coverage or to get a second opinion, feel free to visit NK-DS, Bonkurasu, Bjorn.org and SGCafe, Since I might have missed something.