Fantasy Comes Alive an event brought to you by starbaby production, will be bringing the songs of the anime to you live at the NUS UCC hall this coming end of the month,with a full Symphonic Chamber Orchestra.

With the exact Set-List not set, you can expect songs from the following Video Games and Anime in the 90 minute show, as of April 10th, 2010.

In additional to that, Hitoshi Sakimoto will also be gracing the event, as a special guest. He is the composer of the music in Final Fantasy XII, Valkyrie Chronicles and Final Fantasy Tactics.

There will only be 2 shows, on 2 day at the NUS’s University Culture Center Hall. Both is at 8pm.

Tickets can be bought from Sistic ranging from $20 to $50 with discount for students, Passion Card holders and etc.

That is quite a promising list, but as of now, the Orchestra have not been set, or atleast we don’t know which one. I have sent Starbaby production an email, perhaps we will find out soon!

Update: The music director is Adrian Tan, an accomplished musician and conductor. He has been the conductor of quite a few Orchestras and will be putting together 1 for the up coming concert. Below is some tidbits about Adrian Tan, as stated on the Press release.

He was awarded a Sydney Conservatorium of Music Faculty Scholarship to pursue a Masters degree in conducting studying with Imre Pallo. Adrian has led wind bands and orchestras at the community as well as professional levels. He actively champions the music of Singaporean composers and has presented premieres of compositions by Singaporean composers Americ Goh, Zechariah Goh Toh Chai, Ho Chee Kong and Phoon Yew Tien. In 2005, Adrian co-presented and performed with the Paradigm Ensemble in “Concert for Hope”, a fund-raising concert for the victims of the Asian Earthquake and Tsunami Victims. The event was also televised on Arts Central and raised more than a $30,000 for the cause. In the same year, he formed and directed the New Festival Orchestra to perform Rachmaninoff’s 2nd and 3rd Piano Concertos with renowned pianist Tedd Joselson in the 30th Anniversary of his professional debut. In 2006, he had his debut with the Vietnam National Symphony Orchestra (VNSO) for an all-Tchaikovsky program with Chinese violin prodigy Tang Yun (from the Chen Kaige movie “Together”) in a gala concert at the Hanoi Opera House. He has been invited to return as a regular guest conductor with the VNSO every year since. Other guest conducting appearances include performances with the Victoria Chorale, VJC String Ensemble, National Technological University String Orchestra, Braddell Heights Symphony Orchestra (Singapore) and the Filharmonica “Mihail Jora” di Bacau (Romania). Adrian is one of the founding members of the Chamber Music Society of Singapore, and has produced a series of chamber music concerts featuring local talents like Chan Yoong Han, Jin Li and Fredi Sonderegger – as well as “Passion”, a concert of video game and anime music featuring Eminence (Australia) which sold out Victoria Concert Hall to a wildly enthusiastic young audience.

Also active in theatre, Adrian’s major achievements in theatre include directing the premiere of Alfian Sa’at’s The Optic Trilogy for ACTION Theatre’s 2nd 42 Theatre Festival, and numerous Life! Theatre Award nominations for his productions Ghost Opera and Pulau (a collaboration with writer Ng How Wee) in 2003 and 2006 respectively. He has been the producer of the highly popular Chestnuts series since 2003 – the annual productions continue to garner rave reviews from audiences and critics alike. In 2008, he directed new plays by Ng Swee San and Dora Tan for Magdalena (Singapore) as part of the OCBC Singapore Theatre Festival. An avid film enthusiast, Adrian proudly created his first short film Stranger in collaboration with Boo Junfeng in 2004, and it was selected as a finalist for the 18th Singapore International Film Festival Silver Screen Awards (Short Film).

Here are the ways in which you can participate in the Cosplay competition that can win you a Air Ticket to Japan!

Apart from celebrating the rich musical legacy of video games and anime, bringing the greatest soundtracks from console and screen into the concert hall for a live performance by a symphonic chamber orchestra, S*tarbaby wants our audiences to have fun a t Fantasy Comes Alive!

Come watch the concert, dress in your favourite costume and take part in the pre-concert event Let’s Have Fun With Cosplay!.

To sign up, simply present your concert tickets at S*tarbaby reception desk located at the University Cultural Centre Hall foyer on the day of concert between 6:00pm to 7:00pm.

You will be given the Event Sign Up form and thereafter, our photographer will take a picture of you in your costume  remember to strike your best pose.

Finally, complete the Event Sign Up form and submit it together with your picture taken by our photographer to S*tarbaby reception desk before 7:15pm.

Our judges will select one winner based on best dressed and posed picture (taken by our photographer) at the sole discretion of our judges.

One lucky winner will walk away with a pair of return economy class tickets to Tokyo, Japan!

Good luck and have fun!!

See you at Fantasy Comes Alive!

It’s that simple so, are you going to participate?

But here are some rules…

Let’s Have Fun With Cosp[ay!
Rules and Regulations

Let’s Have Fun With Cosplay! (the Event) is organised by S*tarbaby (S) Pte Ltd (S*tarbaby).

The Event is open to individuals of age above 15.

To be eligible for the Event, individuals must purchase tickets to Fantasy Comes Alive!  Video Games and Anime In Concert (the Concert) through SISTIC.com Pte Ltd (SISTIC) from 22 March 2010 to 1 May 2010 (both dates inclusive).

Participants must present the Concert tickets upon onsite registration prior to attending the Concert to be considered eligible to participate in the Event.

Onsite registration for the Event will begin at 6:00pm on Friday, 30 April 2010 and Saturday, 1 May 2010 at the University Cultural Centre Hall foyer.

Participants will be required to fill out the Event Sign Up form upon registration at S*tarbaby reception desk at University Cultural Centre Hall foyer.

Onsite registration will close at 7:15pm sharp and the last Event Sign Up form must be submitted at S*tarbaby reception desk before 7:15pm on Friday, 30 April 2010 and Saturday, 1 May 2010.

The total number of participants that will be allowed per concert will be 30.

All entries are taken on a first come, first served basis, to be determined by submission time stamp.

To redeem the prize, the NRIC/ Passport number of winner must be the same as stated in the Event Sign Up form.

This procedure is in place to ensure the smooth and timely running of the Concert.

S*tarbaby is a family friendly environment. All costumes need to be tasteful and the barest minimum of coverage that will be allowed at the Event will be that of a shorts and mini skirts.  Body paint, latex pasties, thongs and bikinis are not allowed.

The judgment of what is acceptable is left to the sole discretion of S*tarbaby and our judges.

S*tarbaby reserves the right to refuse entry to anyone to the Event for any reason.

S*tarbaby reserves the right to substitute or replace the prize with any other prize of equal or similar value without prior notice. The winner is not entitled to request for a substitution of prize or cash in lieu of the awarded prize.

Winner of the Event will be announced on Fantasy Comes Alive! website and the winner will be notified by post.

Prize must be claimed by 7 May 2010, failing which the prize or its equivalent value shall be forfeited. The winner whose prize has been forfeited is not entitled to any compensation notwithstanding non-receipt of notification that he/she is a winner.

Prize is not exchangeable for cash.

S*tarbabys decision is final and no correspondence will be entertained.

The winner agrees that S*tarbaby may disclose and publish his/her name and any of his/her other particulars (including photographs) in any manner they think fit for publicity purposes and agrees to participate in the activities organised for these purposes.

S*tarbaby reserves the right to amend, withdraw or revise the Terms and Conditions or disqualify entries submitted for the Event at any time in its absolute discretion without prior notice and disclaim all liability in relation to the Event.

I look forward too some good cosplay that day as well, truely an event to please both senses. 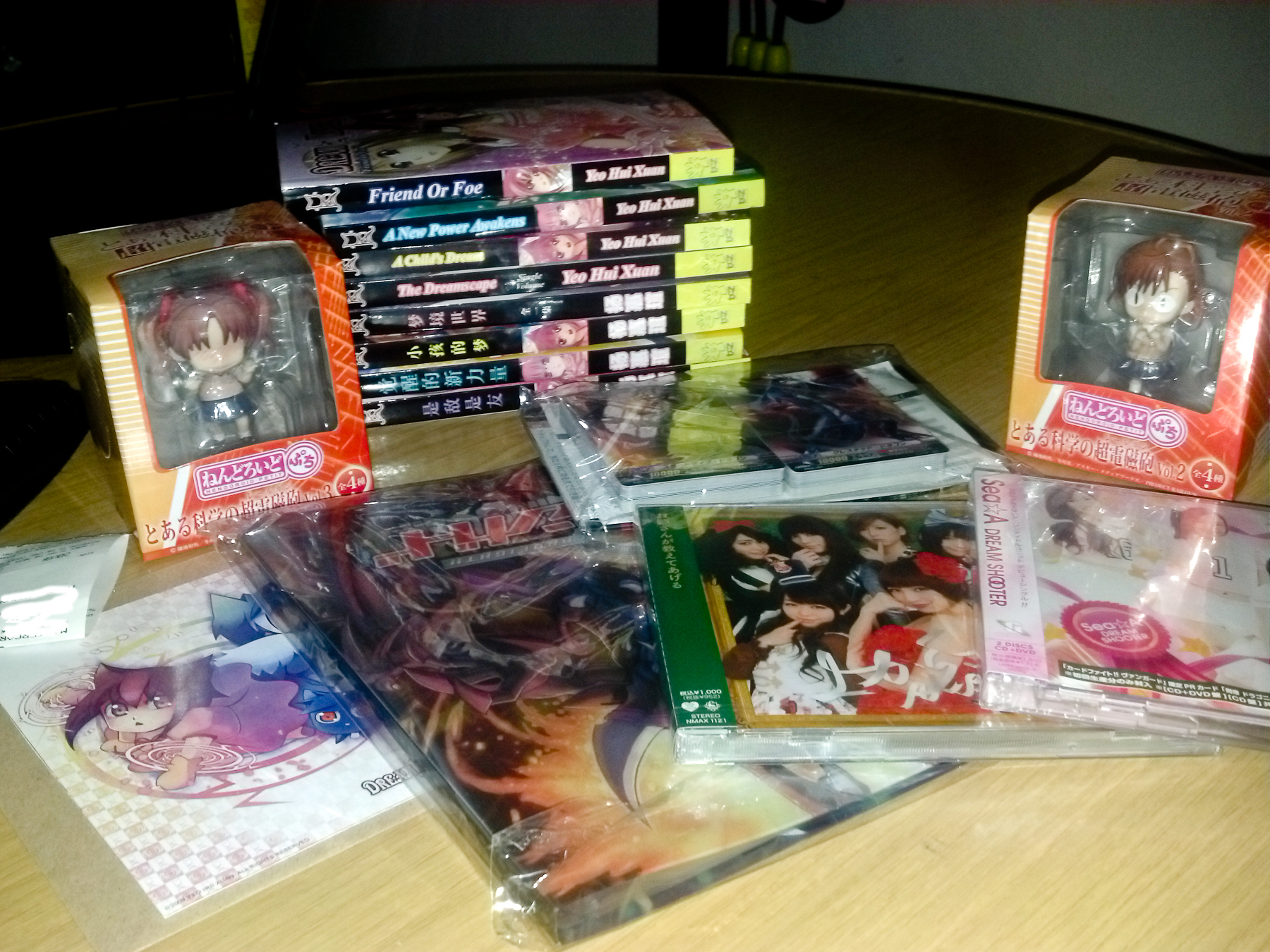